To order, simply call or fax us your order.
Phone: 250.992.7110 OR Fax: 250.992.7508
Mark's Mustard has been craved by British Columbians since original owner and creator Mark Ames, "The Prince George Mustard King," first introduced it in his Prince George café in 1941. The company has changed hands since Ames' death in 1996, eventually being revived by Quesnel's Darwin Netzel, who purchased the recipe because he remembered his first taste of Mark's Mustard in the 1960's.  Netzel believed it was "finest tasting mustard in existence."

Netzel's enthusiasm for the taste of Mark's Mustard led him on a humble but aggressive three-year marketing campaign.  His dedication breathed new life into the company and the demand for Mark's Mustard, which was still being produced out of a small home operation in Quesnel, BC, resurged in the northern B.C. communities of Quesnel and Prince George. Upon Netzel's retirement in 2007, the company once again changed hands.  Operations are still based out of Quesnel, BC, and Mark's Mustard has become a staple of that community.

Current owners Ken and Nancy Worobets are continuing on with the grand Mark's Mustard tradition, stocking it in their very own Quesnel, BC shop - JD MEATS, as well as numerous other specialty stores and national chains in British Columbia.

Mark's Mustard is available today in four varieties, including mild, medium, hot and honey.  They're a mouth-watering and savoury addition to sandwiches and burgers, or as a dip or topping for meat, and can even be used as a grilling sauce base. 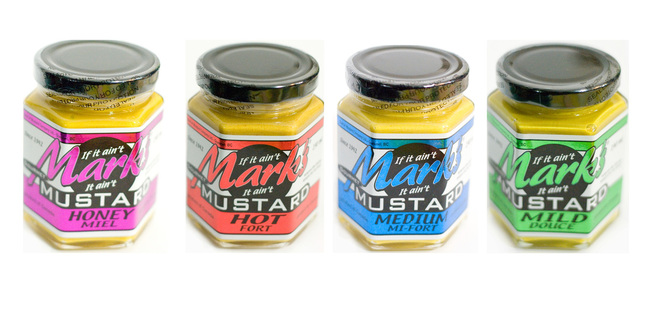